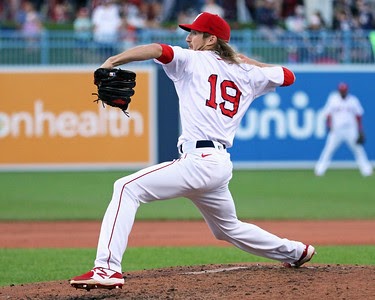 10/3 cup of coffee: The minor league season is coming to an end. After most affiliates had closed their seasons a few weeks earlier, the Dominican Summer League had its last contests today, while the Triple-A “Final Stretch” wraps up on Sunday. Worcester ended their victory over Lehigh Valley strong, with Daniel Gossett (Photo) land a hit in the ninth inning after registering the game’s top 10 batters in sequence. DSL Blue exploded for 13 runs, although they had plenty of help from their intra-organizational counterparts, with each team only generating six hits each.

It was scoreless in five, but Worcester scored in three of their last four batting to claim the win on the penultimate day of their season. The offense was carried out by Francy Cordero, who was 3 for 5 with four RBIs, including a three-run homer in the ninth to put an exclamation mark on the game. Jonathan arauz, who also enjoyed several hits, delivered an RBI single in sixth grade. It was also a great evening for Daniel Gossett, who almost managed a full shutout. Instead, he settled for 8-1 / 3 innings on a hit, striking out seven along the way. He had a perfect game until the fourth inning and kept his hittingless for eight full frames.

It was the last day of the Dominican Summer League season and the Blues came out strong, taking advantage of seven walks, five batters and three errors to explode for 13 points despite only six hits. Each team had the same number of hits, but the Blues walked one hitter, hit another and made only a couple of mistakes, limiting free base runners. Alexis Hernandez was the lone batter between the two teams with two hits, making it for Blue, while his teammate, Alixandri alvarez, had two RBIs. The blue did most of its damage in the second when the home tram scored seven points, followed by another five points in the fourth. Jean Carlos Reyes started for the Blues and pitched the first three innings of the match, yielding just one unearned run on a hit. On another side, Efren Diaz handled the last two frames for Red and was the only red arm not to allow a run, doing so without allowing a runner to reach him safely.

Player of the day: When a pitcher has a hit in eight innings, this is an easy choice for the player of the day. Daniel Gossett put out the first 10 batters he faced, then after a walk, scored 14 straight IronPigs before he was singled out to lead the final inning. It was a terrific outing for the 28-year-old as it was the first time he even pitched in the eighth inning this season. The Clemson product missed out on 2019 and made a strong comeback in baseball in 2021, hitting a 4.22 ERA in 98 innings.