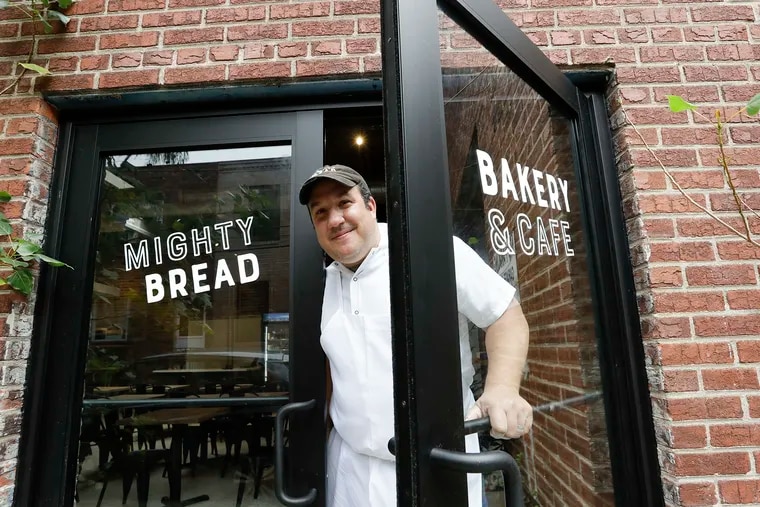 Gerritt Street in South Philly is easily overlooked. Just below Reed, north of Dickinson, it disappears and resurfaces as it passes through the neighborhoods from Pennsport to Grays Ferry. In fact, Chris DiPiazza had lived around the corner for years before discovering the small space at 1211 Gerritt St. that would become the home of his bakery, Mighty Bread Co.

“We used to joke that we were in the worst store in town, because even if you knew our address, you were not guaranteed to find us,” he said. “Now I feel like it’s become our strength. We are in this very small street; it’s a kind of little adventure to understand what’s going on in there.

When it first moved to a brick and mortar location in 2018, Mighty Bread was primarily focused on wholesale. It opened every other Saturday for retail sale. Baffled neighbors stumbled with a cup of coffee from their own kitchen, and DiPiazza waved them in to buy sourdough.

Fast forward to 2021: DiPiazza and his team are set to open a 30-seat cafe serving breakfast sandwiches and pastries in the morning; sandwiches and toast throughout the afternoon; and full brunch on weekends. A full coffee bar will stock up on filter coffee from Herman’s at Pennsport and espresso from Elixr downtown. Mighty Bread sourdough breads, sesame encrusted ciabatta and crispy baguettes and a selection of pantry items – think granola, pesto, cultured butter, candied tomatoes, Horseshoe Ranch eggs, a range of Third Wheel Cheese Co. – will be available all day from Thursday to Monday, from 8 a.m. to 6 p.m. on weekdays and from 9 a.m. to 4 p.m. on weekends. The cafe debuts Thursday, November 4.

The expansion is based on the 12-seat bakery courtyard, which had been closed at the height of the pandemic. Instead, he opened a pickup window that faces the otherwise residential street; queues to buy bread would stretch along the block and wind around the corner of 12th Street. Many new customers discovered Mighty Bread during this time, DiPiazza said, and had no idea the variety of products he was making when the yard space reopened earlier this year.

“People were shocked. “Oh, I didn’t know you had sandwiches or toast or anything. It was this great reintroduction of what we do.

And later this season, look for the bakery’s gingerbread row house kits, which were bought quickly last year. Production has grown from 85 to over 450 this year, and they will be available for shipping nationwide via Di Bruno’s.

This is just another example of how the once small Mighty Bread has grown since DiPiazza launched in 2015, working from West Philly Culinary Business Center and drop the bread at scattered collection sites. The baker said he has come a long way since the days when he brought his sourdough starter on vacation (he was the only one to take care of it).

“It has been a big leap for us on all fronts this year. And really, this was only made possible thanks to the support we received from our community, ”said DiPiazza. “I’m just incredibly grateful that week after week there are still people out there. We are honored to be able to provide all of these products to everyone.