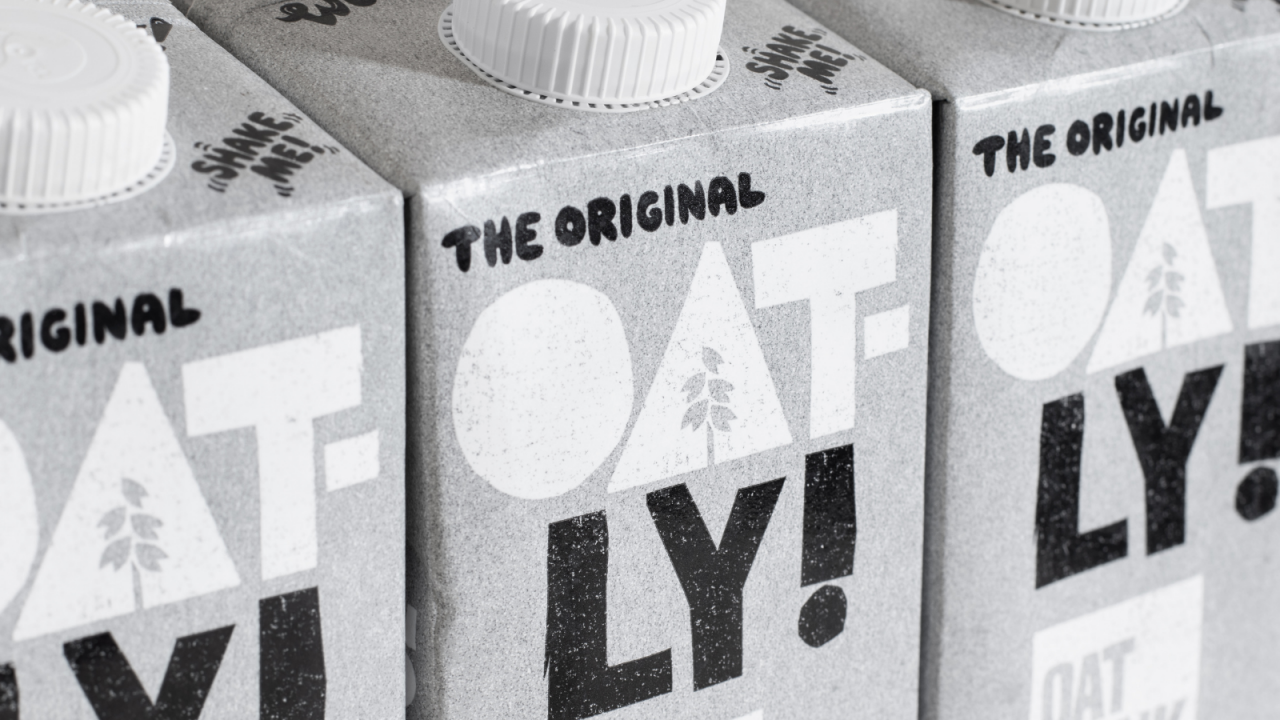 Market leader and superstar Oatly has decided to sue small British producer Glebe Farms for trademark infringement. What might have been a small private matter could start to turn the tide for Oatly’s underdog reputation. Here’s why the brand might be doing the right thing, but risk going about it in a not-so-simple way.

Something has been roasted in the oat milk industry, and this time it’s not just about perfecting your barista coffee. The oat milk dispute between Oatly and Glebe Farms could not be missed.

According to the filing, the $ 15 billion oat milk leader claims Glebe Farms infringes multiple trademarks. He takes issue with the use of the word “Oaty” (too close to his), the resemblance of the white and blue packaging, the slogan “ideal for professional coffee” and the use of the words “shake me” next to Hood. Fascinating stuff.

Is it good? Legally, it is now up to the judges to formally seal this decision, but the public court appears to vehemently disagree with Oatly. Reactions so far tend to express disappointment for a brand that had presented itself very well as the David of the dairy industry, with disbelief that it had become such a mean Goliath. Things went as far as a 55,000 signature petition on Change.org, and a number of social media posts publicly questioned Oatly’s righteousness in the matter. Some denounce his recent ties to investor Blackstone Group, a less than favored group among environmental activists.

Considering how “awake” the brand’s communications have been, this behavior has raised eyebrows in many consumers. And three weeks later, a quick sentiment analysis returns a pretty clear verdict: with almost half of the mentions expressing negative sentiment (just 6.2% positive), that gives it a whopping 42% net negative sentiment. It turns out that oat milk can also turn sour quite quickly.

Right or wrong, is this the right thing to do for Oatly?

If you want my opinion, these two brands are nothing alike, but like most of you, I’m not a lawyer. To be fair, there is something a little fishy about PureOaty: each of its non-dairy milks is very humbly named (“Almond”, “Soy”), but in one way or another, for his oat milk, he opted for “PureOaty”. He claims this is a nod to the purity of the product, but does he say his other drinks are not pure? It is admittedly quite off-brand for its portfolio conventions.

If I’m being completely honest, while I doubt that many consumers are confused by seeing the two boxes, it looks like he’s trying to ride the wave of Oatly’s marketing formula here, and I’d bet he knew exactly what he was doing. So not only does Oatly at least have reason to raise questions, but there is an important reality that Oatly faces: Because of how trademark laws work, defending your trademarks is not just a matter of fact. question of good or bad against a specific producer.

Defending your brand’s position on every possible infringement is essential in demonstrating how ready a business is to defend itself. He signals to future court rulings that it’s not just about choosing who he likes and who doesn’t, he’s just objectively defending his business. What’s at stake here isn’t ruining a small farm (something Oatly expressly said he’s not interested in), but simply setting the precedent for future infractions. Say, for example, when Danone goes to work. When asked, his communications manager was quite adamant that “trademark protection works like this: we have to face all fights”. They said, “We cannot choose. If we don’t, it would be like saying it’s okay for others, including Big Milk, to also use a similar brand and the name “Oaty”.

Tackling a small producer can be a costly exercise for its image in the short term, but in the long term having that precedent might be an inevitable choice. Ultimately, whether we like it or not, Oatly became the standard for a category that he not only invented, but exploded. A brand of this size now follows rules that may seem unfair to the little ones, but these are only collateral damage in a fight against the bigger ones.

There is something about Oatly

Notwithstanding the court ruling, Glebe Farms is unlikely to let this crisis go to waste. People love a good David vs. Goliath story, featuring a small producer who normally doesn’t have access to BBC News coverage. Meanwhile, Oatly may well win a marquee fight, paving the way for a bigger one in the long run; and look, whether that’s how your awakening heart wishes to see it or not, it presents it to the general public as a reliable and credible company playing at the top of the category. At this point, the question is not so much whether Oatly should have taken that step, but whether he did it a little too complacently.

So far, his public statements have been disappointing. Operationally, he did a good job trying to respond individually to anyone who tagged him on social media (leaving little to no post unanswered on LinkedIn). But tonally, something is wrong when your brand next door starts to speak like another great corporate lawyer whose first duty is to increase shareholder value. Fiduciary responsibility is a reality, but it is not part of Oatly’s vocabulary.

Assuming his legal actions were to be taken, he could have used this ordeal more to his advantage by orienting himself more towards the benefit of PureOaty. First off, it might get a little more laugh at the Soy v PureOaty difference, a clear indication that, taken in context, Glebe Farms is trying to ride Oatly’s (naturally) sweet wave. He could also have used it to celebrate the farmer’s foray into the category. If you want to believe it, this fight is not to ruin the farmer, it is about protecting the brand. If what he wants is that he (and all brands after that) don’t use “Oat-y” in his name, then focus on that and show your support for the company behind. the offense. Celebrate the fact that he hopes to spotlight another brick in this progressive wall.

Hats off to Glebe Farms and maybe even look for some creative ways to cut legal fees in the end when Oatly wins it all. Use it as a public reminder that he wants the oat milk world to be successful as a whole. Oatly has brilliant and creative writers who have mastered the art of building that fairness. But it’s important to take the measure of company actions, not just words or social contacts, in shaping a company’s reputation. And when Oatly’s is built on the unusual alternative, it probably shouldn’t just be (big) as usual.

Shann Biglione is Co-Founder and Product Manager at Kelp and former Director of Zenith and Publicis Media.

To learn more, sign up for The Drum’s daily U.S. newsletter here.