Coffee and barbecue go together perfectly, says Joe Zavala, co-owner of Zavala’s Barbecue in Grand Prairie, “It’s all about time and temperature. “

He and his wife Christan Zavala are building a standalone cafe behind the barbecue, intended to be the first in a series of Mas Coffee Co. stores in Dallas-Fort Worth serving up espresso and barbecue breakfast tacos. They expect the building to be ready in 18-24 months.

“We want to sort of create a small resort, where people can stay for breakfast, lunch and dinner,” says Joe Zavala.

The barbecue joint will stay in front, with the drive-thru behind. (Mas Coffee Co. is currently operating inside Zavala’s barbecue, until he moves.)

Mas Coffee Co. and Zavala’s Barbecue opened in 2019, a combo that allowed Zavalas to serve customers longer hours in a single day. When the pandemic hit, customers were already used to stopping by the store to buy take-out food and drink.

Then came more innovation: “One thing COVID made us do is create food outside of the barbecue,” says Joe Zavala. Zavala’s now sells burgers, quesadillas and fajitas on certain days. These dishes were “created so that we can survive,” he says, and also offer customers low-cost options when breast and rib prices soar.

Soon, the family plans to add Tex Mex Wednesdays to the calendar, when executive chef Jason Ramirez recreates Joe Zavala’s mother’s enchilada recipes one day a week. She still works in the restaurant as well: she arrives at 4:30 am Tuesday to Friday to make tacos for breakfast.

Next stop: a beer garden

Zavala’s and Mas Coffee Co. now have an army of followers. The restaurant was named one of the 50 best barbecues in the state by Texas monthly last month, which resulted in a dramatic increase in sales, said Joe Zavala.

They run out of room to make more food, especially with their small kitchen measuring 100 square feet.

“When people come to our kitchen, they laugh,” says Joe Zavala.

The new building will serve as a commissary and smoking room for six smokers. Mas Coffee Co. will be its anchor point, at the front.

Between the two buildings, the owners envision a beer garden with outdoor seating for cafe or barbecue patrons.

Maybe one day they will open a brewery with their business partner Drew Wright. 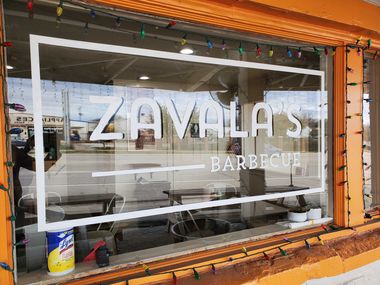 The Zavalas were high school sweethearts who graduated from Grand Prairie High School in the early 2000s.

When they opened their barbecue and cafe downtown, they were in awe of Grand Prairie’s municipal leadership.

“There will never be another Zavala barbecue,” confirms Joe Zavala.

Zavala’s Barbecue and Mas Coffee Co. are located at 421 W. Main St., Grand Prairie. The café is open from Tuesday to Sunday. The barbecue is sold Thursday, Friday and Saturday, from 11 a.m.